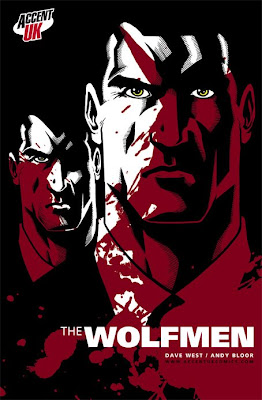 Thought I'd post some Wolfmen images... this debuted at the Bristol Comic Con last year, and has since gone worldwide as we got it listed in Diamond Comics' Previews publication in September last year and was released overseas in December 2007.
Not giving too much away, it's basically a crime/horror title and centres on Jack Grey, a small time hood who dreams of being a big fish, and if that means getting in with The Wolfmen, the notorious London gang then that's what he'll do... even if it costs him everything he has.
It's kind of The Krays with a horror twist... it's available from the Accent UK website www.accentukcomics.com and finer comic shops over the country.
Posted by Andy Bloor at 08:25