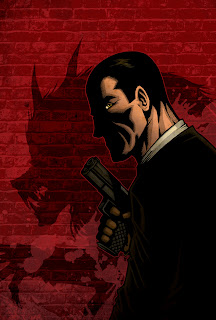 Above is my cover for issue 3 of all around good guy, comics entrepreneur/printer Stuart Gould's 'UK On Display' magazine.

I can't say enough good things about Stuart, he's one of the most infectious and likeable people on the UK comic circuit, he not only prints the majority of UK indie/small press books under his UKComics company but now he's acting as a distributor as well, trying to get these comics into as many folks hands as easily (and affordable) as possible.

As the magazine has increased in size to A4, my original drawing wouldn't have worked too well, so I offered to do a new one, and after much head-scratching I came up with the above image.

My aim was to do something fairly simple but hopefully striking. Was fun to draw the Wolfmen again.

Next up is another pinup for something I can't mention yet, then back to Midnight Man.
Posted by Andy Bloor at 06:25