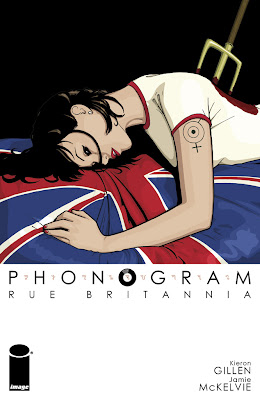 I feel very lucky to be able to mention that I am doing a short 2 page story in Phonogram 2.
Phonogram was one of the best new series to debut last year from Image Comics. Written by Kieron Gillen and drawn by Jamie McKelvie, this six part series dealt with the premise that "music is magic' and features Phonomancer David Kohl and the era of music called Britpop (remember that?)
It was through reading Phonogram that I someone managed to bag Kieron to write some short stories for us for the anthologies. He very kindly asked me to do one of the shorts in volume 2 (there are other artists contributing too, so will have to step up my game) I didn't need to be asked twice so probably the best new thing, comic wise, that's happened to me.
The trade collecting volume 1 of Phonogram is out now, and you can get it from Forbidden Planet stores, Amazon and your local comic shop. It's a great read and well worth your time and money. 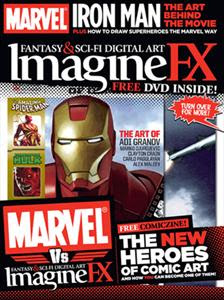 Apparently I get a mention and a couple of quotes in a feature in the latest Imagine FX magazine.
The article was written by Kieron Gillen and is a good read if you get the chance to pick up a copy.
He did ask me a few questions over email a while back but completely forgot about it until now.
Makes a lovely surprise and very nice to see my name mentioned along with 'proper' creators!
Posted by Andy Bloor at 01:39 No comments:

Just found this:
Clicky Clicky!!
Looks like he might be joining Accent UK at some point too...
Posted by Andy Bloor at 08:26 No comments:

One of my oldest friends, Crispian Woolford, has just started a new blog:
Lyssophobia
It's in the early stages at the moment, but expect more content soon. Crispian did a story for ROBOTS, which I helped out a little with, so I'm delighted for him to finally get published.
He's going to be in WESTERN too, so looks like he's got the comic bug back!
Posted by Andy Bloor at 04:27 1 comment:

Well, I took the plunge and made it to the Bristol Con on Saturday.
My thoughts? It was ok, when I finally got there after getting 2 trains (and lugging a bag with my sketched in ROBOTS copies and also my portfolios with me) and having quewed up for something like 20 minutes to get it my first impression was that it was packed! Wandered around aimlessly trying to find the Accent UK guys, when I finally did spot them (thanks to my banners) I settled down and caught up with the guys.
Sales weren't as good as last year when we launched ZOMBIES, but it was nice to meet up with people who had some nice things to say about my work and also saying how much they enjoyed WOLFMEN, which was very cool. I signed some copies of my books, and went in search of some of my artistic heroes, unfortuntately most seemed to have gone early, or were at another venue signing, which was a bit poor really, as that wasn't made clear (at least not to me).
Finally met up with John Reppion and Leah Moore, my collaborators on ROBOTS, always nice to be able to put faces to the names, and they're such nice people it was a pleasure to meet up and have a chat. John's from Liverpool and described my stuff as 'Boss' which always makes me smile... we're hoping to join up an another story soon which I would jump at the chance to do.
Met Paul (Jack Staff) Grist, a thoroughly nice chap, and also got a page of artwork from Charlie (Walking Dead) Adlard, who also did me a WOLFMEN sketch which we will use in the next book. Charlie is an amazing artist, the sketches that he did for people were just brilliant, and he's so fast too... kind of makes you sick really :-) He said  some nice comments about my art in WOLFMEN too, which took me by surprise...
Also, caught up again with Kieron Gillen, who may yet do me a story for WESTERN, next years anthology, but as he's mega busy this may or not happen. I'm pleased for him though as he's a great guy and I've really enjoyed working with him. Sounds like he has some cool things lined up, so I'll be watching out for those with interest.
At the end of the day I was quite glad to get home, the heat giving me a headache on the way home didn't help... that'll teach me to drink more water!
If my some miracle I happen to get WOLFMEN 2 finished for the next one I'll go back next year, if not... well, we'll see. It was fun, but total chaos in places.
Next one: Birmingham in October/November... expect more of the same :-)
Posted by Andy Bloor at 04:08 No comments:

From downthetubes.net
Pretty positive, mentions a couple of things I am aware of when I did the book and am working hard to correct mistakes like that, but overall a good one.
Off to Bristol tomorrow... wish me luck!!
Posted by Andy Bloor at 04:14 No comments:

I went to Dave's on Saturday to collect some copies of ROBOTS, and they do look superb. The printing is spot on and the whole package is definately a step up from ZOMBIES last year.
Got some copies to mail out today, and then doing a few sketches in copies that we're selling at the con this coming Saturday. This will be my first Bristol con, so not quite sure what to expect. Hoping to meet some of my favourite artists, like Alan Davis and maybe get a few books signed and a sketch from him too. I'll be at the Accent UK table, so if you're there pop along and say hi.
Will report on how the con went early next week.
Posted by Andy Bloor at 02:27 No comments:

Robots back from the printers!!

Just got an email from Stuart at Citrus Creative, who did such a good job of printing Zombies and Wolfmen last year, that Robots is done and about to be delivered to Colin's place of work.
Looking forward to seeing them hopefully this weekend!
If they've turned out as good as the other books then I'll be very happy.
Not long until Bristol now... let's hope this one is as popular.
Posted by Andy Bloor at 06:17 No comments: