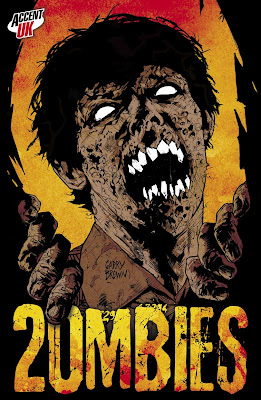 Probably my idea this one, I know there's way too many Zombie comics out there but the first Zombies book (and the first I designed for Accent UK) was such a success for us that it made perfect sense to do another one.
Above is the marvellous cover art by Garry Brown, with some colour tweaking, logo and overall design work by yours truly. Demand to be in it is very high as you would expect, it's going to be another great book I'm sure.
I'm teaming up with Dave for this book on a story called 'The End'... based on a rough idea I had but really pleased that Dave is keen on working on with me.
On the Wolfmen side of things, a few more pages inked... the end is in sight... somewhere... but it's at that stage where I don't really want to show anything for fear of spoiling it.
The book will be launched later in the year at Whatever Comics in Canterbury and we'll all be there at BICS in October. Hope to see you there.
Posted by Andy Bloor at 06:22

Yep ... you can all blame Andy for this one :o) I seem to remember it all started with his idea for the logo and then his questioning why we don't do a second issue. As ZOMBIES itself is all but sold out now, and ZOMBIES being such a draw to our table at Cons ... we had to agree with Andy and hence ZOMBIES 2 or 2OMBIES was born ... or should that be re-born ...
Good news on WM2 Andy ... but must you keep it all secret from me as well ... I don't know ... artists .. sigh :o)

Awesome design sir. I know it will be a while until it's out, but I'm very, very excited for it.

Replacing the zee with 2 is a stroke of genius:)