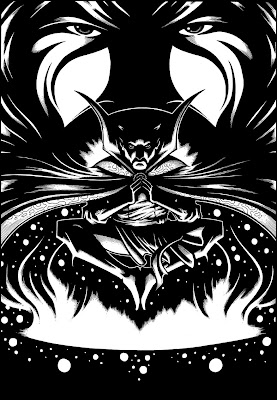 And here's the Doctor Strange one I did as well, really enjoyed doing these and would love the chance to do some more commissions.
Posted by Andy Bloor at 04:33 2 comments: 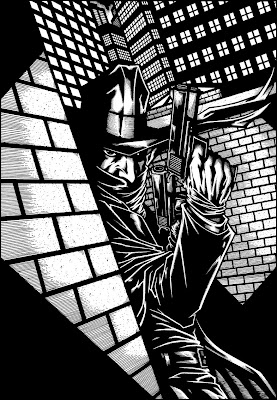 Finally completed these commissions for BICS last weekend for Alan and Bob, they've been great waiting this long for me to complete them and seemed very happy with the results.
BICS was a bit up and down for me personally but a great show for Accent UK, selling the most books out of any UK show so far, and most pleasingly 'Fall of the Wolfmen' was the best seller, followed by 'The Wolfmen' still going strong after three years!!! I'll write a bit more about it soon.
Posted by Andy Bloor at 09:31 1 comment:

'Fall of the Wolfmen' launch at Whatever Comics - a howling success!! 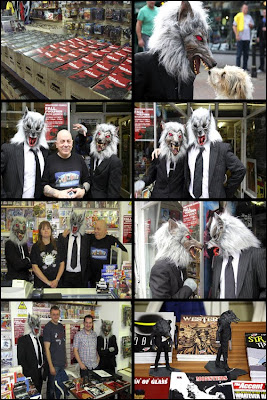 Blimey - where to begin?
Dave has written a much better piece on this that I ever could, so hop over to the Accent UK website and click on the 'events' link and that will take you there.
My thoughts are that I'm still in shock by it all really. Having not felt very well (ill children can mean ill parents very quickly!) towards the end of last week it did look very doubtful that I would be able to attend the event. Infact, it was only until 6.30 on the Saturday morning that I called Dave up and said I was ok to go - I still didn't feel 100%, but felt I had to go... it's not often these things happen and I wasn't going to let this bug ruin it for me.
So off we went, and about 4hrs later we arrived in a very nice and sunny Canterbury and in no time at all we were met by Manny, the owner of 'Whatever Comics' a shop that has supported (and sold) so many Accent UK comics. Manny (and his wife Debe) couldn't have made Dave and myself any more welcome... looking after us at all times... paying for a room for us to stay in... taking us out for a meal... they really made us feel like professionals and treated us so well that a really big 'thank you' goes to both of them.
After a quick nibble to eat we were starting to get the table ready for the signing when all of a sudden customers appeared and before we knew it we were in full swing and we were signing and selling comics left, right and centre. It was such a fantastic experience for both of us that we are both still buzzing about it now.
We sold pretty much all we brought with us, and what we didn't sell, Manny took from us for his regular customers who couldn't make the event. After signing all of those it was off out for a meal, again looked after by Manny and Debe... we were also joined by Karol Steele (who did such fantastic work dressed a wolf(wo)man handing out leaflets on the day) and her partner Andy.
I've pinched some photos from the Accent UK site so you can take a look for yourself.
We had such a brilliant time, and the book seemed to go down very well with everyone that it did make the last few years working on it worthwhile. Yes, it's been a slog at times especially after the boys were born when finding the time to sleep, let alone draw, was tough enough and the days when I'm ready to call it a day and give it all up pop up from time and time. But having a day like that certainly helps!
Until next time :-)
Posted by Andy Bloor at 08:51 1 comment: