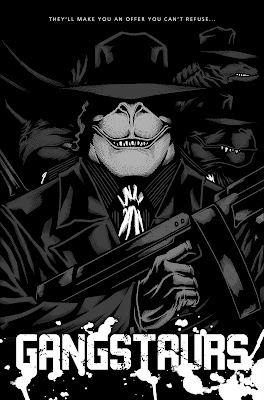 Seeing as I've out it on facebook, thought I'd bung it up here as well. The above is my pinup for 'Predators' next years Accent UK anthology. Gangster dinosaurs... whatever next, werewolves?
Posted by Andy Bloor at 08:34 1 comment:

End of the year - a mini review 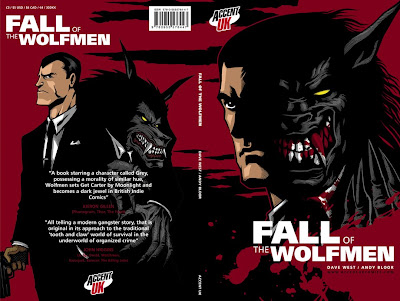 "I really should have used this cover!"
Well, here we are nearly the end of 2010. Where to start (or end) well not a bad year all in all, finally completed 'Fall of the Wolfmen' had a brilliant launch at Whatever Comics in Canterbury, a rather lacklustre BICS and lastly a pretty good Thought Bubble. So not too bad all things considered. Although I do wish I had used my original cover art for the book and not the one I ended up using. Typical me really.
Highlight of the year is undoubtedly being in the final issue of Image Comics' Phonogram (The Singles Club 7) In true geek fashion I took a copy along to Thought Bubble and got as many of the books creators to sign it. Luckily Becky Cloonan was a last minute addition to the show and I managed to get her to sign it as well. Jamie even got me to sign it as well! Thanks must go to Kieron and Jamie for including me in the book. I really appreciated it.
I'll post a scan of the cover later this week.
Finally completed my work for Accent UK's next anthology 'Predators', which has been delayed to next year for no other reason than storage issues. These books take up a hell of a lot of space when boxed up and there's only so many we can store. This will come out early 2011 and followed later in the year by 'Zombies 2'. With the zombie craze showing no signs of 'dying' out (see what I did there?) it made financial sense to do another. All being well I'll have a story in there somewhere.
Where that leaves me with comics after that remains to be seen at the moment. There are times I still want to create them and times where I feel I've done all I can do, and with so limited time to work on them these days it might be prudent to call it a day and find something else to occupy my (limited) free time.
My first project is the long-delayed children's book I'm doing with a friend at work Nigel Pye, a very talented writer that also writes the text for my annual Christmas cards. We have quite high hopes for this book, it's up to me to do it justice. It will be a nice departure to work on as again as well as the illustrations to do, the books need designing too.
After this, I'll take another look at comics and see if there's any fire left. I've some options open to me, including a cracking script by Dave West (based off an another idea of mine) that I might do if I can, again, do it justice.
Lastly I'd like to wish you all a very Happy Christmas, and all the very best for 2011.
Posted by Andy Bloor at 02:35 No comments: