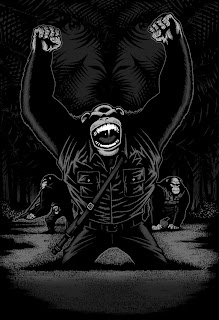 As Amazon have printed a preview of Brahm Revel's superb Guerillas volume 2 book here: I thought it would be ok to show my final pinup that's going in the actual book.

A while back I showed the one that we decided not to include so I hope we picked the right one! I'm immensely chuffed to be included alongside artists of such statue as Brian Churilla, Tyler Crook, Christopher Mitten, Justin Greenwood and Jason Latour.

Hopefully my effort doesn't stand out too badly compared to the others.

Guerillas volume 2 will be launched in July.
Posted by Andy Bloor at 08:16 No comments: