My Maker and I Pinup 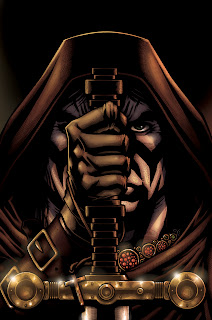 I did this a good while ago but for some reason never posted it. Sadly the book it was due to go into – 'My Maker and I' – from Accent UK is in a state of limbo as far as I'm aware.

It's a shame really as the book would really have gotten people's attention. Between Owen Johnson's fab script and the tremendous artwork of Dan (TMNT) Duncan and Matt Soffe it really is something to behold. I've done a fair bit of work on this behind the scenes, between logo designs, interior design pages and even attempting some of the lettering (less said about that the better!) it's a crime this isn't out there already really. I think everyone is hoping that when Dan (the artist) has some free time between working on the TMNT comic for IDW that he'll return to this.

My pinup was coloured quite incredibly by Steve Howard, and he did such a super job on it it deserved to be seen and not just sitting in a folder on a hard drive somewhere.
Posted by Andy Bloor at 07:38