Time for something different! 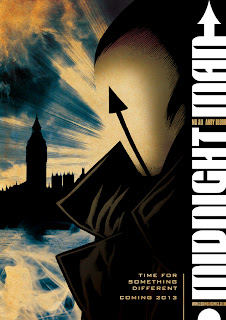 It's official, my new project is 'MIDNIGHT MAN'

I'm finally going to get off my lazy arse and do something. My partner in crime on this is the mega talented Mo Ali (check his blog to see what I mean) and he took my basic character (which was just the sketch I posted a while back) and created an inspired piece of pulp comics that's probably going to rank as the most insane thing I've ever done.

And I say that as a good thing!

The above image was done just to advertise this on twitter and facebook, it was simply a 10 minute drawing and a bit of photoshop trickery that came out much better than I expected. The response to it has been incredible, I'm just not sure if it's going to be the cover though.

The only thing missing there is a publisher logo, that's because we have no publisher. Not yet anyway. We're talking to a few people but we're also tempted to self publish so we have complete control over the final product. Very early days yet though, watch this space is all I can say.

Where does this leave 'Last of the Wolfmen' (AKA Wolfmen 3)? well my plan is to do that straight after I complete this, so I haven't forgotten about that book I just felt the need to do something else after drawing the same book for the last few years.

I'm also in the early stages of a project with Jason Cobley that will be a complete departure for me. I've read the first few pages and it's fabulous stuff. I'm going to be cracking on with some character designs on that very soon too.

More on both these books very soon!
Posted by Andy Bloor at 09:40