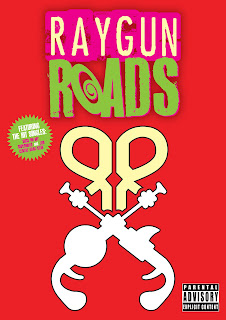 As my blog was feeling neglected I thought an update might be in order.

I'm involved with a super project called 'Raygun Roads' from Owen Johnson and Indio! that is just the most insane, fun thing you've seen. Check out Owen's blog for more details and to see some of Indio's psychedelic art.

I'm doing the book design, and above is the cover as it stands. Owen is talking to publishers (but might also self publish) so keep your eyes peeled for more info. There are some very clever tricks to this, not only in the storytelling but also how the overall package relates to the story as well. It's great fun and I'm chuffed to be part of it.

I'm also going to be doing design work on Stacey Whittle's follow-up to the acclaimed 'Into the Woods'. 'Deeper into the Woods' will feature the same dark fairytale quality the first book did, and with some very talented writers and artists involved it looks to be another great book.

Typical for me I've a rush job on to finish a pinup off for the end of the week (silly really as I've had loads of time to do it!) I've gone for something very simple and graphic for this, I'm just hoping it doesn't look *too* simple compared to the others in the book.