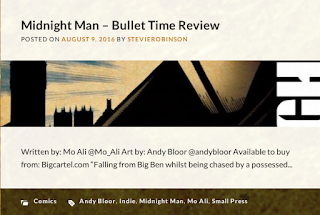 Stevie Robinson who runs the 'Other Worlds Than These' blog has reviewed Midnight Man here so pop over there straight away and read it. In short I think he loved it!

I'm going to do a quick review of the Cardiff Independent Comic Expo that I went to in June.

I live a good distance away from Cardiff, but heard so much good things about it, so I thought 'why not!' I booked a table and waited for the day to arrive.

My good friend John came with me, bringing along his own wares to sell, a very cool and sharp idea, beautifully designed (he's a designer as well himself) and after a good journey there (I think we got there in just over 2.5hrs) we arrived at the venue... well after a few wrong turns as it wasn't the easiest place to spot when you don't know where you're going!

Setup was easy, and made easier by the helpful staff there, and Iz, one of the organisers even dropped off bottles of water to thirsty exhibitors, which was very welcome!

We were sat next to Gavin Mitchell and Emily Owen, both well known in the small press world, and just beyond them was Red Mask from Mars creator and Awesome Comics podcaster Vince Hunt, with his friend, horror writer Daniel Marc Chant.

All in all it was a fun day, a bit quieter than we would have liked (something to do with the football going on I think!) but we did have busy spells and sold a good number of books, some prints and even some artwork! Lots of nice comments about the books, which is nice and I also did an art-swap with Vince. So I now own a very nifty page of original Red Mask from Mars artwork, which I'm very chuffed with. If you haven't read his book, do yourself a favour and rectify that straight away.

The day went very quickly and before long it was time to pack up and make the long journey home. I have to admit the driving was pretty tiring, nearly 5hrs in one day... but the con itself was good and one, I think, I'd make the journey back to next year.
Posted by Andy Bloor at 02:17